The old Rogue is being made ready for an assault on IRC and ORCi Div 4 in the Sydney Hobart race.
Being one of the smallest and slowest means we will be at the back end of the fleet, but that is no matter.....its the adventure and opportunity to share this experience that counts. Follow along on the Rogue Ravings Facebook page.
Posted by Roaring Forty at 10:04 PM No comments:

Some pics inside Rogue Wave.
To make room for spinnaker packing the saloon table can magically disappear!
The dining table splits in half and each side stores in a slot under each saloon seat. The table has has folding legs that store vertically against the saloon seat side. The table bolts to the cockpit sole with covers for when not in use. It can be setup as a full or half table.

Once assembled up to 7 merry crew can drink their G&Ts whilst having their roast chook dinner cooked in the rotisserie oven! 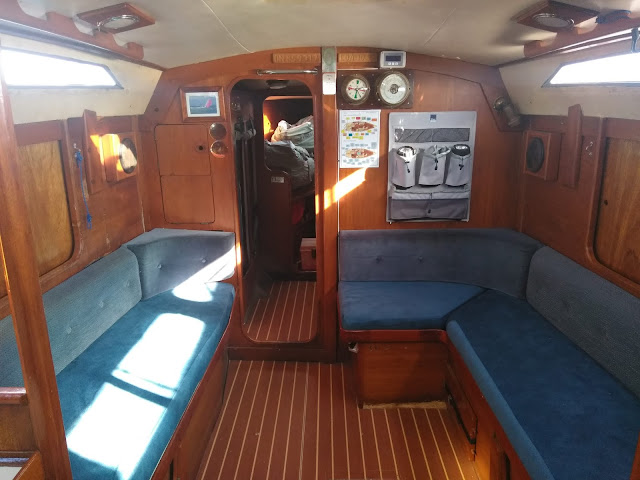 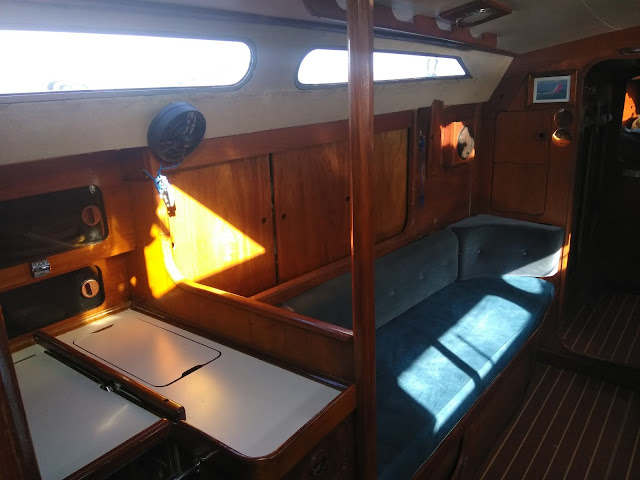 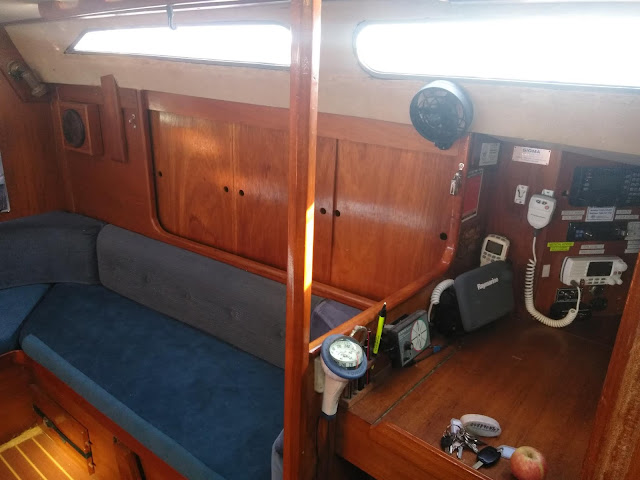 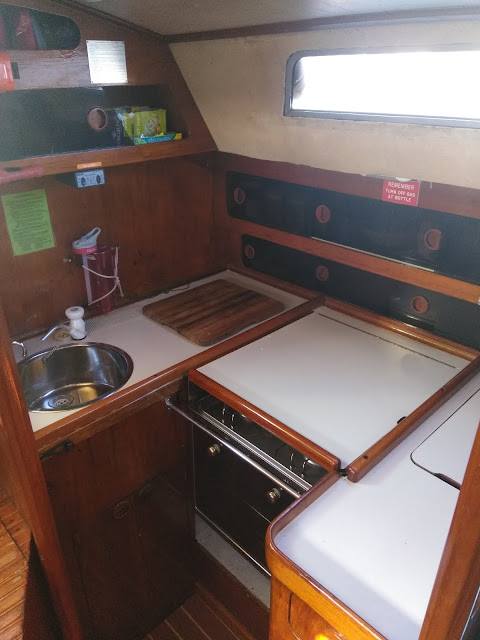 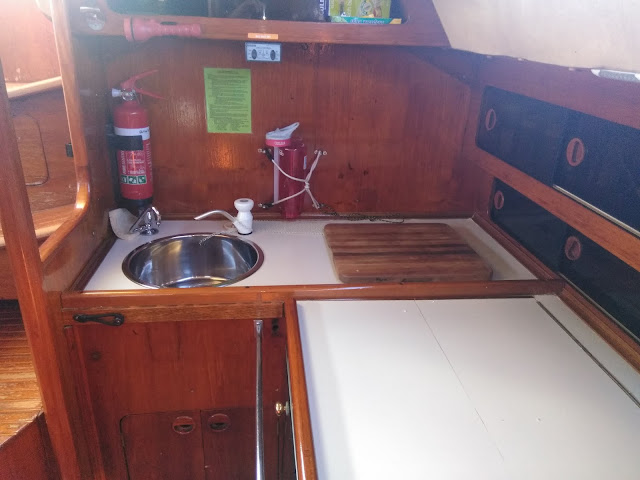 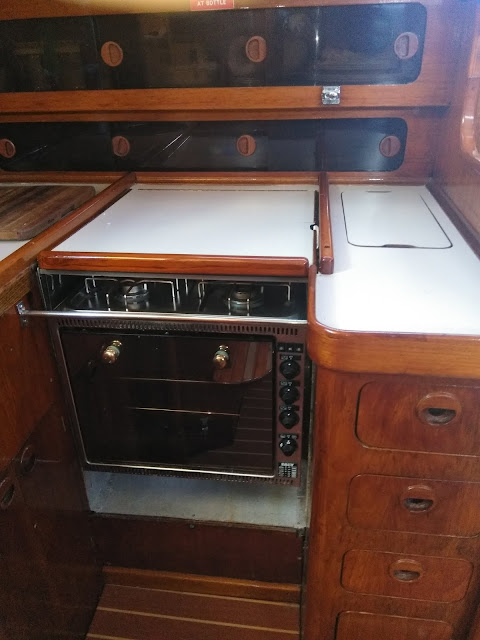 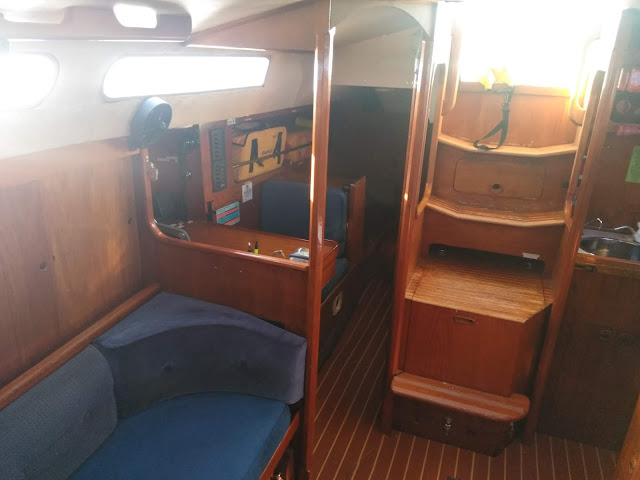 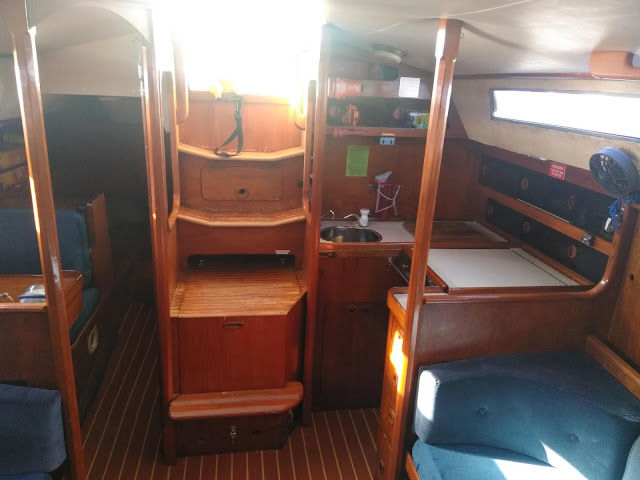 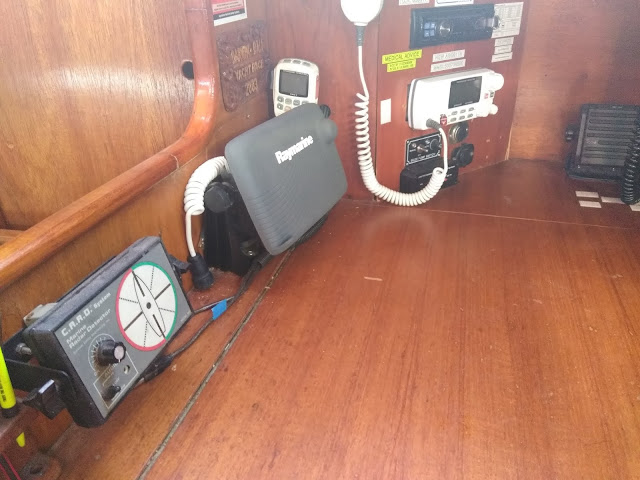 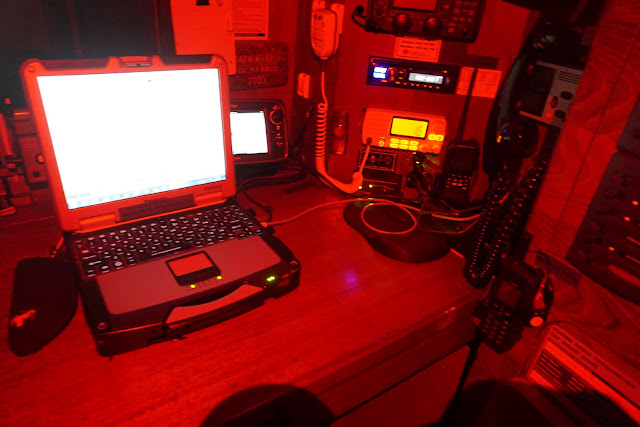 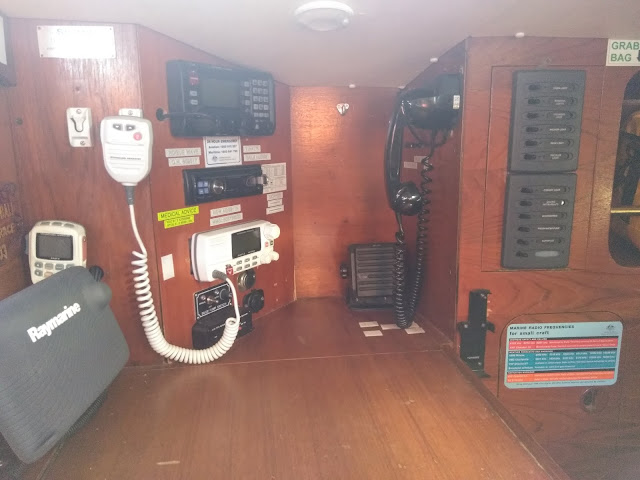 Posted by Roaring Forty at 10:57 PM No comments:

I've been coming to Cove Marine at Oyster Cove since 2007 and every time the team looks after the old Rogue. So we are up again on the hard for the annual haulout. A couple of coats of Jotun Seaguardian, fresh boot topping and cut and wax the topsides. 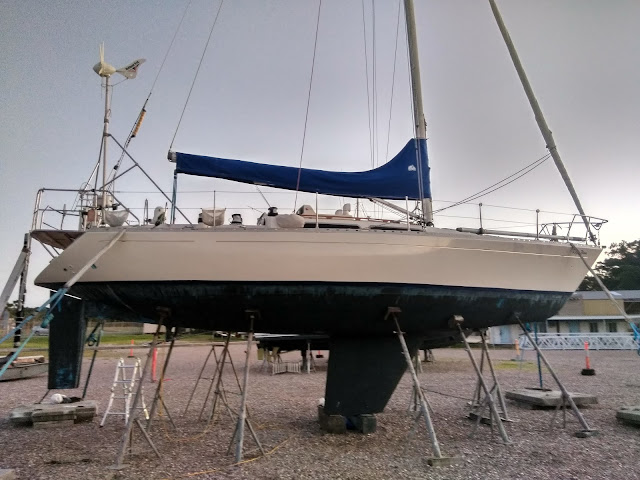 For a yacht constructed in 1983, the old Sigma 36 still has her original gelcoat. There are plenty of 'battle scars' on the old girl: even some scars from the Tsunami that hit Indonesia and funneled down to Penang where Rouge Wave was berthed. 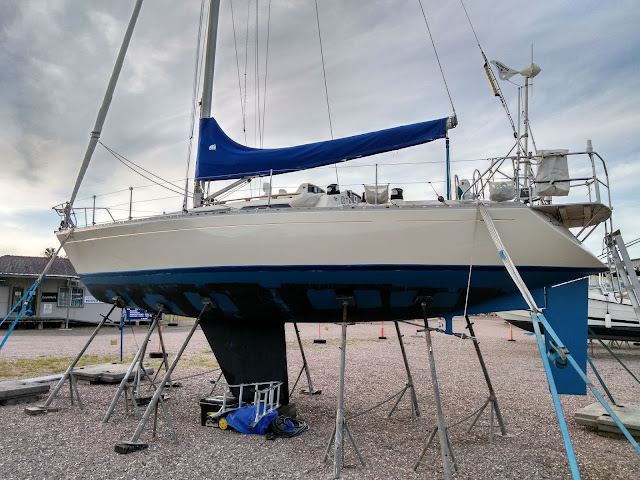 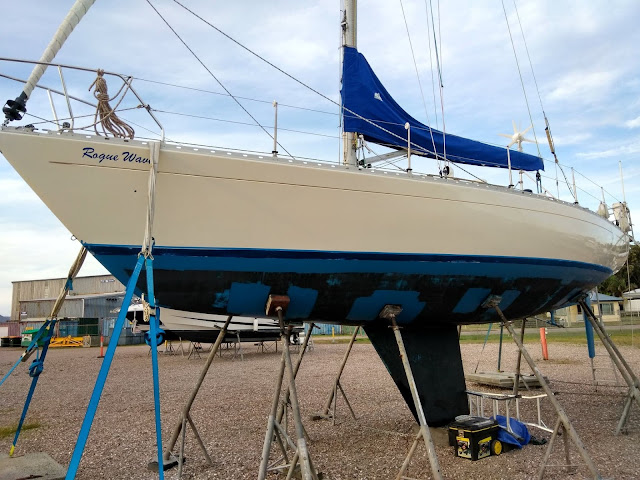 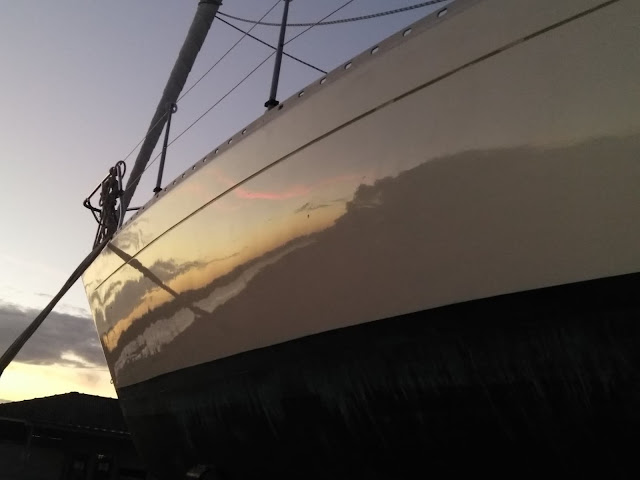 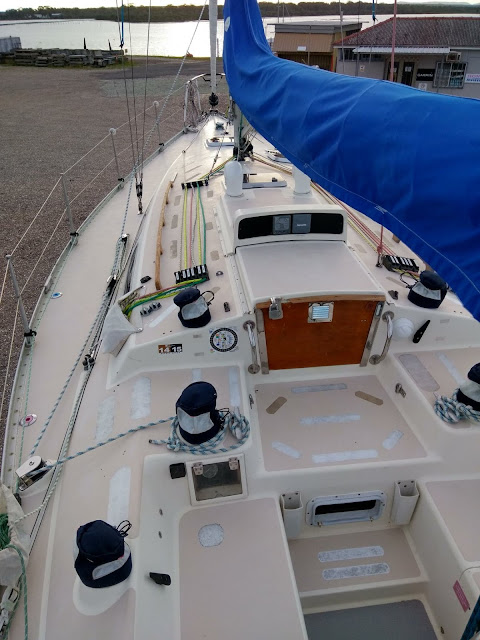 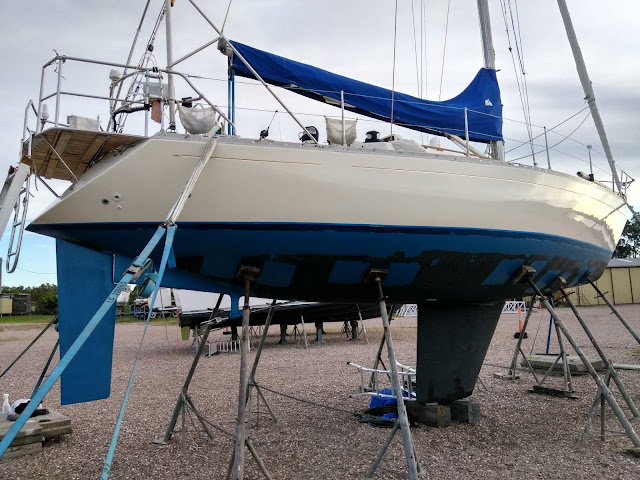 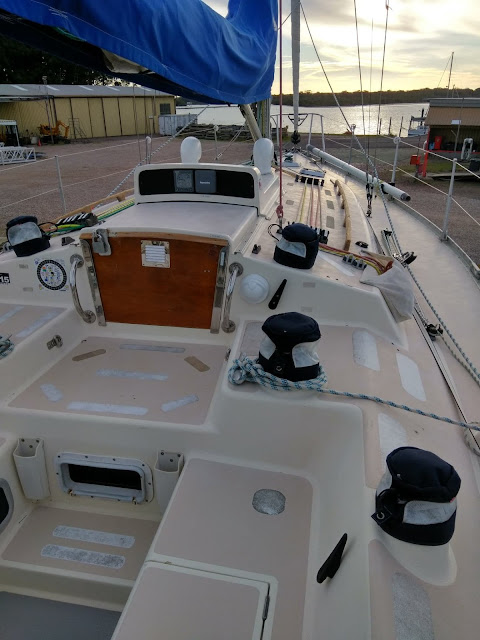 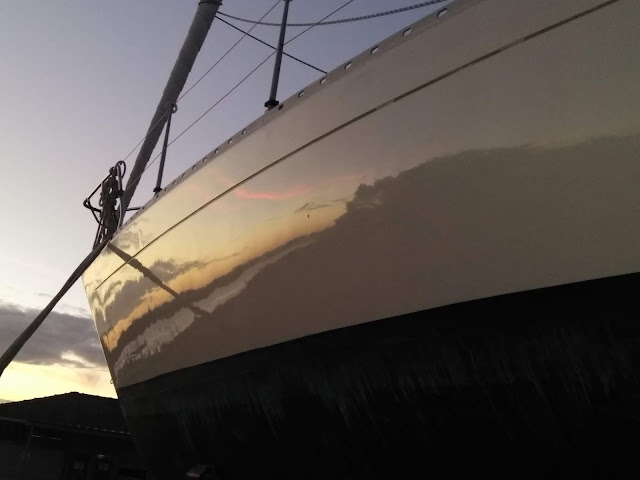 Posted by Roaring Forty at 8:06 PM No comments:

Since the race was forcast to be in light and variable breeze, I opted to not fill my water tanks with 200 litres but kept it to approx 60 litres plus the mandatory emergency jerries. Same strategy for the fuel, I had about 50 litres for battery charging and port manoeuvres with 1 x 10 L jerry as emergency.

By 05 Apr we had slowly clawed our way north and a little west. Unlike the larger boats who were in a completely different weather pattern by day 5 and they were making more west. Much better day today but still falling short of the old Rogues performance window.
136NM daily run.....now we are getting there.

By 06 Apr we were again clawing away north and making reasonable progress. Sailed close to Wonganella Bank where a summit pops up to 95metres from 2500+m. Seas a tad confused around that baby as the swell wrapped around about sides causing cross seas. Bust the assy tack block through side loading so replaced and relocated the lead. Over the past few days Am Meer and I have had some match racing visible on AIS. I lost Geoff after my last wind hole as I was ahead of him at the time and he altered course and sailed around me still on the breeze.
145NM daily run......still not on the money.

Posted by Roaring Forty at 1:15 PM No comments:

My race was really between two boats; Am Meer and Robbery since we were the only ones in the 36-38ft bracket.  Unless your shorter waterline boat planes/surfs/foils, every sailor knows for speed, there is no substitution for waterline length and sail area and light displacement. So the 45-55 footers had their race and we had ours. Fortunately Am Meer was also racing IRC and so was Ocean Gem so at least I had that working for me!

By 02 Apr  around 1000h we were doing 'circle work' as the wind hole swallowed the old Rogue. The race forecast indicated it was to be a light air, following breeze kind of race. That's certainly not in my favour as my IRC certificate limits my sail choice to one roller reefing genoa at 132% and the main and storm jib for upwind work, whilst for downwind I had 1 x Assy 1.5oz All Purpose Spinnaker (APS) and 1 x Sym Spinnaker 0.75oz.
109NM daily run....frustrating.

I spent a lot of time hand steering (read tiring) to keep the old girl moving and at times flew the APS in 5 knots only to have the fluky wind shift 10 degrees and collapse the rock show. When the breeze completely dropped out I was left with a sloppy see and slatting sails. The constant slatting broke two battens and two sail slugs, so down with the main and I spent the next 2 hours sewing slugs and replacing battens. Still no breeze so the main remained resting on the boom to minimse damage to the sail and hardware. Around 2000h the breeze began to fill in and we were back in the race.

By 03 Apr my speed ranged between 3-5 knots and at around 0300h I was on the latitude of Auckland, about 25NM behind my Predict Wind plot so polars were adjusted for the next download. 70NM daily run......dismal.

By 04 Apr speed had increased and at times we hit 7-8 knts as our course shaped NNW. Had a few rainsqualls during which the wind would blow from any direction. The lighter or more unpredictable the breeze, the more effort required to keep the boat moving in the right direction and the impact is very little downtime for rest.
100NM daily run......compared to yesterday ....better.

After hoisting the main I sat on my mooring until about 30 min pre start. The start is the harbour entrance wall so you need to sail around inside the port and gybe/tack back and forth until the start. With an inner Solent forestay attached for offshore work, tacking the headsail means I need to furl the genoa and in a confined space with boats every where plus ship/tug movement, the lesson learned was drop the mooring when 30min from start, motor sail around with main and only in last 10min shut her down and crack on. Skippers can elect to have some helpers on board to set sails and get the boat on song before the extras get taken off about 15 min before the start.

A conservative start is very important for old guys like me on tight budgets. One wrong move in confined spaces with maybe not-so-cautious skipper and the dream is over before it began.....4 years wasted.

As I did in 2014, I started at the back of the fleet and gathered pace as the gun sounded. We're off and I was the last out of the gate.
With sheets cracked, we raced north along the beach so the crowd could see our spectacular, super fit, highly tuned sporting physiques and up to the first starboard mark whose purpose was to identify the reef that sticks its neck out from the beach and across the rhumbline. I sailed close to the rhumbline and close enough to the Coast Guard rescue boat that I could shakehands....but instead I offered my thanks for their support. The remainder of the fleet headed a bit further offshore. By the time we arrived at the port hand turning mark letting us loose toward Australia, I had regained some ground and hardened up on the wind to start the chase.

Rogue Wave does windward very well and it wasn't long before I began hauling up and over the top of Robbery and then focused on Am Meer  just off my starboard bow and Ocean Gem off my port bow and about a half a mile ahead. Robbery fell off below my starboard quarter into my wake and eventually off my visual horizon by nightfall.

When in NZ people asked me how far offshore do you start to see Mt Egmont and I could only speculate. So for all those who asked, at dusk and 34 NM out, I could see Mt Egmont lower section whilst the top of the volcano was covered in cloud.

Posted by Roaring Forty at 12:22 PM No comments:

On return to NZ my first task was to tune the rig and get her nice and tight. Fractional rigs have more rake aft and higher tension on the cap shrouds than your typical masthead rigged boats.

The old Rogue still has the original Kemp (Selden) single spreader, tapered mast configuration but I pimped it up with 8mm dyform rigging, new turnbuckles and chainplates as part of my 2012-13 refit, so its very critical to get the tune correct.

I use both Spinlock and Loos tension gauges to ensure tension readings side to side are as close as possible to each other and my selected % of the wire specification.
Posted by Roaring Forty at 11:41 AM No comments:

My Links and Blogs

DONATE TO SOLDIER ON

Roaring Forty
Being temporarily located in the US has presented an opportunity I could not pass up - to purchase 'Roaring Forty', a 1997 Lutra Design one-off carbon Open 40 race yacht. Once the refit is complete, the current plan is to sail her home in Oct 2018 via Cape Town. Future events include Sydney Hobart; around Australia solo non-stop record attempt; Melbourne to Osaka double handed; and across to the US for the Transpac to Hawaii. Then its off to UK for the Fastnet and AZAB; over to Malta for the Rolex Middle Sea Race and OSTAR. Then once in the US, its Newport to Bermuda finishing the campaign off with the RORC 600 and any other Caribbean rum drinking regattas that may appeal! The challenge is arranging these events into a schedule that is realistic and achievable and affordable. I promote short and long term goal setting and these goals form my retirement plan....and as we know, one must plan to make the dream a reality.